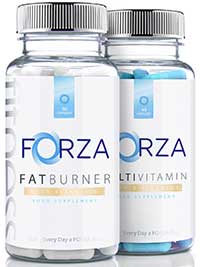 Forza Fat Burner is a weight loss product manufactured in the UK by Forza Supplements. The company has been trading since 2007 and produces a number of other health and beauty products. The company’s reputation is good and customer services can be contacted via email or telephone (normal business hours). The Forza website also provides a mailing address for the company headquarters in Kent.

According to the sales page on the Forza website, their fat burning capsules contain a “tried-and-tested” formula that contains a number of stimulants and natural energisers.

Claims: To be a tried and tested fat burner

Positives: Reputable company with a good set of ingredients

Negatives: PhenQ is a better product in our opinion

The nutritional information provided on the manufacturer’s website states the figures provided are “per serving”. This is very confusing because the size of the morning serving is twice that of the one taken in the afternoon.

However, each “serving” contains:

How to Take Forza Fat Burner – Two capsules are required shortly after breakfast and a third capsule should be taken just after lunch. Caffeine-sensitive individuals should start with one capsule per day and monitor for negative issues.

Capsules should always be taken with a full glass of water.

The only customer feedback available comes courtesy of Amazon but, at the time of this review, all the comments available were attributed to Amazon “Vine” reviewers who had received free product in exchange for their reviews.

“If you’ve reached a plateau these pills may help, but you need to exercise and eat right too.”
“So far I have not experienced any ill effects, and the pills seem to make me feel a little perkier (probably all that caffeine), but I don’t think I’ve lost any weight and could probably get a similar buzz from drinking a few extra cups of coffee.”
“I felt the benefits within a few days. This may have been just a placebo effect, but my energy levels did go up, I was not so hungry between meals, and I lost a little weight. Unfortunately the pills stopped working after a few weeks.”

Forza Fat Burner is suitable for vegetarian use, but Forza state the product is not intended for children or pregnant or breastfeeding women. They also suggest users who are sensitive to caffeine commence supplementation with only one capsule per day. People who have difficulty sleeping are warned not to take the capsules after 3pm.

Although Forza fail to make such a recommendation, we feel certain user groups would be wise to consult their GP prior to taking any capsules:

Forza Fat Burner does not have a money back guarantee.

A bottle of 90 Forza Fat Burner capsules costs £18 from the manufacturer’s website. Forza also sell the product via the Amazon marketplace but, with a price tag of £18.99 per bottle, this is not the cheapest way to go.

We rate PhenQ as the best fat burner currently available. It is not just our opinion but many leading experts within the diet industry.

PhenQ is a multi action fat burner that can also block fat from being absorbed and also suppress appetite.

PhenQ has a long 60 day refund policy and ships with without a delivery charge.