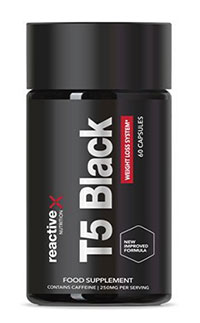 Re Active T5 Black is a nutritional supplement manufactured by Desirable Body, but although the name suggests the formulation triggers fat burning by stimulating the thyroid gland into releasing an increased amount of metabolism-boosting “T hormones”, this is not the case.   The marketing material states the main ingredient is cayenne pepper. It has a good reputation for getting results, but the fat burning effect of cayenne does not involve thyroid hormones.

Re Active T5 Black can also be used as a pre-workout supplement and promised benefits include:

Claims: To be a thermogenic fat burner

Positives: Has a decent ingredient profile, reputable company with a long history

Negatives: Doesn’t feature as one of the “most effective”

What is Re Active T5 Black and How Does it Work?

As far as weight loss goes, Re Active T5 Black appears to primarily function as a thermogenic fat burner. Supplements of this type contain ingredients that have been chosen for their ability to increase the metabolic rate and raise the body temperature very slightly. These two changes cause the body to burn its available calories faster than normal while also beginning to utilize its stores of fat as a source of energy. Re Active T5 Black also contains stimulants that will help provide the promised energy increase.

Usage Guidelines – It is important to always take the capsules with a large glass of water and only one capsule should be taken each dose. The first dose of the day should be consumed first thing every morning and, for best results, this should be 30 minutes before breakfast. The second dose is required 30 minutes before lunch.

“Re Active T5 Black is the best fat burner I’ve ever used. It’s already helped me to lose 18lbs. If you want a phenomenal training session it can help with that too. I’ve never had so much energy in the gym.”
“I can’t say I am impressed with this product. It helps me clear my head a little first thing in the morning, but it hasn’t burned any of my fat and my energy levels are about the same.”
“By the time I started on my second bottle I had already lost 16lbs, so Re Active T5 Black must be a good fat burner. I’ve also noticed I have a heap more energy these days.”
“These pills did nothing for my weight, but they made be sick and dizzy and gave me a terrible headache.”

According to the manufacturer, Re Active T5 Black is not intended for women who are pregnant or nursing a child. People who are taking medication are advised to consult their GP before using Re Active T5 Black and anyone who feels unwell should cease supplementation at once.

Where to Buy Re Active T5 Black

A 60 capsule bottle of Re Active T5 Black costs £29.95 from the manufacturer’s website. Superdrug also stock the product and the price is the same. Amazon is a little cheaper with a price of £27.95 per bottle.

Re Active T5 Black is sold without a money back guarantee.

Which Diet Pills Are Most Popular 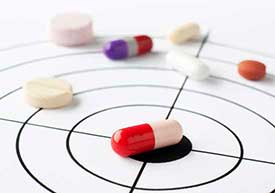 We have gathered information on hundreds of products available from all over the world and listed them in order.

We use criteria such as speed of results, how beneficial, potential of side effects and of course customer opinion.