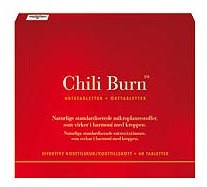 Chili Burn, a weight-loss supplement for sale from New Nordic, claims that it is a 100% natural fat burner, the result of seven years of intense research.

It is made from ingredients which can be found in many kitchens, and is said to increase metabolism and reduce fat with no dangerous side-effects.

Does Chili Burn have what it takes to help you reach your diet goals? 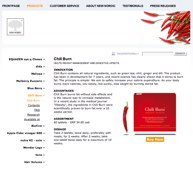 Claims:  To be a natural fat burner using its 7-year-in-the-making formula

Negatives:  Not in the same league as Capsiplex

How does Chili Burn Work

The product’s website claims that it promotes weight loss by increasing the body’s expenditure of calories, which are used for energy production and heat. The details of the mechanism are very vague, but appear to rely on the ingredients’ supposed thermogenic properties to increase metabolism and facilitate reduction of fat.

What is in It 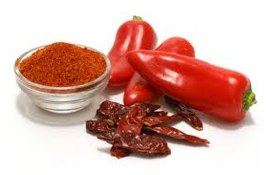 The main ingredient in Chili Burn is green tea leaf extract, which accounts for 486mg of the pill’s content, by far the dominant ingredient in the combination. Also present, and lending the pill its name, is 12mg of chili-capsicum fruit extract. 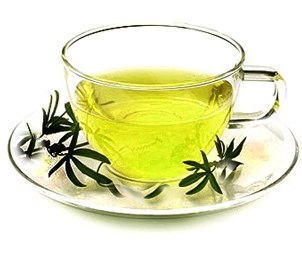 While Chili Burn lists its ingredients along with their quantities, unlike many of its competitors, it still fails to prove that any of these components have a demonstrated effect on weight loss.

Green tea has not been positively identified as promoting fat reduction, and chili pepper, even in a more reasonable amount, doesn’t actually create heat, but rather the feeling of heat. This isn’t a result of the breakdown of calories, but from capsaicinoids binding to pain receptors to produce a heat-like sensation.

Likewise, the other ingredients listed also have yet to be proven to provide the benefits that New Nordic claims will work together to reduce your waistline. The scant research provided by the company points to a paper about the effectiveness of green tea in a completely different form and paired with other ingredients like caffeine, and other irrelevant or inconclusive studies.

Little information on Chili Burn can be found in mass media, where it is commonly the subject of negative diet supplement reviews on popular watchdog blogs. These websites unilaterally give Chili Burn a failing grade, citing many of the same issues discussed here.

User reviews appear to be generally negative, with many individuals complaining that they could not take this pill more than a few times before developing symptoms of digestive issues, ranging from indigestion to constipation.

Very few reviews were complimentary towards the product or cited any weight loss whatsoever, and the ones that did noted unhealthy levels of weight loss in unreasonably short periods of time.

This might be attributed to digestive issues brought on by the pill which caused the body to eliminate alarming levels of waste in response to its presence.

As should be clear from the user reviews noted above, there is an apparent risk of developing digestive issues when using this product.

The minimal literature available for Chili Burn, however, does not make note of any side-effects resulting from use of this product, but people with certain preexisting conditions are advised against its use.

Specifically, those who suffer from anemia, liver problems, gastroesophagal reflux disease, stomach ulcers, or gallstones, are warned to exercise caution or avoid use altogether. In addition, individuals with thyroid problems are advised to consult their doctor prior to use.

Chili Burn appears to be yet another diet pill marketing itself on the tangential health benefits loosely-associated with its ingredients in mass media.

The lack of specific information available regarding this supplement is somewhat alarming, and the dearth of user reviews for a product that’s been on the market for several years is quite telling.

Usually, at the very least, the manufacturer has put out enough marketing information to produce several pages of search results, but Chili Burn appears to be operating under the radar, even after being on the market for several years, and this may be a good thing.

Selling at a wide range of prices, from £15 to upwards of £40, with no money-back guarantee whatsoever, you may be better off just increasing your dietary intake of these ingredients in their everyday form, and saving yourself a whole lot of money and a host of potential digestive issues as well.

can be purchased via several high street chemists and supplement stockists. Holland and Barrett, Tesco, Lloyds Chemist and Boots etc.

The concept of using chili pepper in diet supplements was executed best by Scottish based Advanced with their Capisplex brand.

Capsiplex is the best selling and most popular diet pill and can also stake a claim to be the most popular fat burner in the UK.

Capsiplex suggests it can cut your calorie intake by 278 per serving.