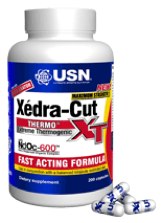 Xédra-Cut XT is a dietary supplement produced in the UK by USN (Ultimate Sports Nutrition).

Not surprisingly given their name, the company produces an extensive range of sports supplements, but USN also market several products that are designed to encourage weight loss.

Xédra-Cut XT is one such product, but the available marketing material supplies very little information about the benefits the capsules are supposed to provide and the sporting influence is apparent by the claim:

The previous statement shares label space with the promise “extreme thermogenic” so it would seem the blend is  also supposed to provide extreme fat burning. 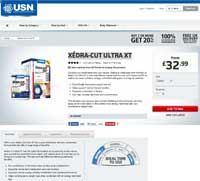 Claims:  To be a thermogenic fat burner

Positives: Contains Capsimax and produced by a highly respected company

What Does Xedra Cut XT Do

Xédra-Cut XT contains three proprietary blends so although the inclusion rates for the three blends are provided the exact quantities of individual blend constituents is not.

Without exact inclusion rates it is impossible to say how effective this blend may be, but Evodiamine is believed to have thermogenic qualities, and the ingredient has been successfully used to reduce the body fat of mice, but tests have never been carried out on human subjects. Synephrine is also credited with fat burning abilities, but cayenne is the only proven fat burner included in the mix.

Caffeine will certainly provide some extra get up and go and may also help suppress the appetite. Yerba mate provides a further source of caffeine, as does green tea, but green tea also contains catechins (a form of antioxidant) that are believed to boost the metabolism and encourage weight loss. Glucuronolactone provides further stimulation and nariingin’s main claim to fame is its ability to enhance the effects of caffeine.

Bioperine is a patented form of piperine, sourced from black pepper. Piperine is responsible for providing black pepper with its fiery flavor and tests show the compound can burn fat as effectively as it does the tongue.

Two to three capsules should be taken (on an empty stomach) each morning, or 30 minutes before a workout. Six to eight hours later the dose may be repeated (with a small meal). Capsules should not be taken after 4pm and users are advised to drink 8 to 10 large glasses of water each day.

Although feedback about some of the XT blend variations (there are several) is available independent feedback about the original XT product cannot be found. The manufacturer’s website contained just three reviews.

“Since taking this i have felt much more alert and full of energy. My appetite has suppressed im feeling really healthy. I would recommend this to anyone.”
“my hunger pains are gone and so is the between meal snacking and weight! This is truly awesome!”
“I’ve only had it a few days, but I don’t feel like I want to snack between meals any more and I feel full of energy, I am looking forward to seeing my results from this. Good so far!”

Xédra-Cut XT is sold without a money back guarantee.

None of the suppliers mention any side effects, but the blend contains a lot of stimulants so it seems likely that some users may experience side effects. The blend also contains synephrine—a potentially dangerous ingredient—so Xédra-Cut XT should be avoided by pregnant or nursing mothers and people who have any health issues or concerns. Anyone who has doubts about the suitability of the product should seek a doctor’s advice before use.

Xédra-Cut XT can be purchased from Amazon and eBay. Holland & Barrett also stock it, as do some other independent retailers, but it is possible the product may soon be discontinued because although customers can purchase Xédra-Cut Ultra XT and Xédra-Cut SF (stimulant free) directly from their website USN are no longer marketing the basic blend.

Most suppliers offer customers the choice of purchasing capsules in quantities of 100 or 200. Prices can vary considerably. Holland & Barrett charges nearly £30 for a 100 capsule tub of Xédra-Cut XT. The Amazon price is less than £22.

In the thermogenic fat burning genre it is our opinion that PhenQ is better option. It is far less complicated to use and can be used by the casual dieter or someone more into more strenuous work-outs.

PhenQ is arguably the best selling fat burner in the UK – such was the demand that when it was introduced to the market it sold out completely after just three days.