Xtralean is a weight loss capsule. The product has been around for a while, but not in its present form. The original formulation contained ephedrine (a problematic ingredient that can produce dangerous side effects), but the present day Xtralean capsules have cleaned up their act and are thankfully ephedrine-free. 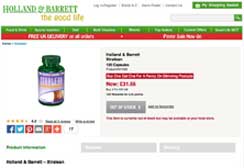 Claims:  To be a maximum strength fat burner

Positives: Associated with Holland and Barrett

It is impossible to say what the offered benefits are meant to be because the Holland & Barrett website only provides a list of ingredients accompanied by some usage instructions. Judging by the ingredients used in Xtralean, the blend is probably designed to work as a combined appetite suppressant and fat burner.

Xtralean Pros & Cons at a Glance

Dosage – How To Take

One Holland & Barrett customer gives the product a five star review and states:

“i have been using this product for a while now & really notice the difference would highly recommended.”

Forum reviews show a mixed response to the product and the fact that some customers complain of a racing heart suggests many online reviews may refer to the old blend, containing ephedrine.

The caffeine content may be problematic to some users, but anyone who can handle a few strong cups of coffee should be able to take Xtralean without issue.

Possible caffeine-related side effects include the jitters, restlessness, nausea, headaches, and heart palpitations.

Pregnant and nursing mothers are advised to seek medical advice before deciding to take any form or supplement. The same advice is offered to anyone who has health issues or concerns.

If you are looking at a fat burner then PhenQ would be our preference. A capsicum based commercial diet pill that sells incredibly well in the UK, Ireland, United States, Canada and Australia.