SlimQuick Razor is a very aggressively marketed diet pill (not so much in the UK) that is formulated to help increase metabolism and raise body temperature while offering extreme fat burning potential.

The official website suggests it is ‘America’s strongest female fat burner’ and also claims that you could lose somewhere in the region of 25lbs.

The packaging has a very stark warning “Extreme Fat Burner” – this just adds the air of hype-i-ness if such a word exists.

Claims:  Claims to be the strongest female fat burner that can help you lose up to 25lbs fat

Positives: From the SlimQuick stable, a well established company with nearly a decade of history. Contains capsicum.

How Does SlimQuick Razor Work

SlimQuick Razor works by stimulating the metabolism – there’s little doubt about that. How it does so, however, is cause for concern. 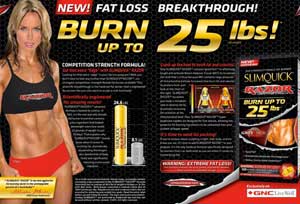 SlimQuick Razor has almost 20 active ingredients, as well as a few other inactive ones that help the caplets to keep their shape.

Capsicum extract and pepper extracts are both the same thing: pepper products. Capiscum is what gives spicy peppers their heat, and it has a warming effect on the body. If you’ve ever eaten a very hot pepper before, you may have begun to sweat; capsicum is the cause of this. It also causes the metabolism to speed up a bit and has a very strong connection to the fat burning process – but only if taken in the correct quantity.

L-tyrosine is an amino acid naturally produced by the body. It increases feel-good hormones like dopamine and norepinephrine, but has only shown to be effective at this during times of physical or emotional stress.

This could be fatigue, cold, sleep deprivation, or the loss of a loved one. All of these things are fairly serious, which makes the inclusion of l-tyrosine seem suspicious – is weight loss with SlimQuick Razor really that stressful? Generally, manufacturers want to avoid wasting their money on ineffective ingredients, so it must have been included for good reason.

The inclusion of phosphatidylcholine, however, is really the biggest cause for concern. Phosphatidylcholine is extracted from sources like egg yolks and soy beans; it is a vital component of living cells. It has been used in injection lipolysis, in which chemicals are injected that supposedly break down fat, but it has never been proven to be even remotely effective.

In fact, several of the listed symptoms, although never called “liver failure,” are extremely indicative of liver failure. The inclusion of phosphatidylcholine seems like nothing more than an attempt to prevent liver damage. If a product needs this kind of a measure, it probably isn’t the kind of thing you should be ingesting.

SlimQuick Razor in the Press

There have not been many mentions of SlimQuick Razor in the press. The only mentions seem to be from lawyers’ offices, asking former users to contact them if they have experienced liver damage or failure.

SlimQuick’s website has customer testimonials on the site, as well as a review from a doctor. This doctor is known only as Dr. Di Pierro, and the site notes that he was compensated.

The language is vague, and says things such as “real clinical research” without providing a link to this study or any information about it. The site also notes that a 1350-calorie diet was followed.

However, the daily recommended intake of calories for an adult is 2000 calories. At 2000 calories, most adults will maintain their weight.

The diet that SlimQuick has them following would result in a rapid loss of weight anyhow. And then, to top everything off, SlimQuick notes of its success stories that “results [are] not typical.”

However, like all testimonials – and especially those posted online – you must take them with a grain of salt. Although you may want to believe that everyone is honest, some companies pay reviewers to leave dishonest reviews. And unfortunately, there really is no way to catch people in the act, as it were.

Some sites will display if the customer purchased the product there – for example, Amazon does this – but sadly, they are in the minority of sites.

The side effects of the ingredients in SlimQuick Razor include dizziness, headache, irritability, and liver damage or failure.

In all likelihood, SlimQuick Razor is ineffective at best and a placebo at worse. The stimulants in it may suppress appetite for a while, especially if they cause nausea, but the weight loss will likely be water weight due to dehydration. And if you are particularly sensitive to stimulants, you may not even be able to take it for long enough to notice a difference.

Where To Buy SlimQuick Razor In The UK

The Slimquick range is available all across America and Canada in multiple pharmacies and health supplement stockists. In the UK purchasing opportunities are sparse as far as the high street is concerned.

The official Razor website or a third party web reseller would be the most likely for a UK consumer.

PhenQ is strong fat burner and appetite suppressant that is better alternative to SlimQuick. It is aimed at wide range of consumers from the casual dieter to more hardcore fitness enthusiast.

PhenQ has possibly the biggest range of testimonials of any commercial diet pill – their tactic of soliciting video testimonials and success stories and publishing them on their official website is a masterstroke.