Consumers constantly search for newer and better versions of just about anything. So when a new product, like the diet pill Adapexin-P, is named best in its class, consumers often assume that it’s been proven to be more efficient than the competitors.

But, what about when a product decides to bestow the name upon itself? That’s apparently just what Adapexin-P  did by deciding to give themselves the title of “#1 Rated Diet Pill of 2012”. Any product that is legitimately better than its competitors has no need to resort to blatantly false claims.

When customers are satisfied, they sing the product’s praises through reviews, word of mouth, internet blogging, and social media sites. So, when a product claims to be the #1 Rated, but yet there is no buzz surrounding it, it’s usually a pretty sure sign that the claims are self generated. 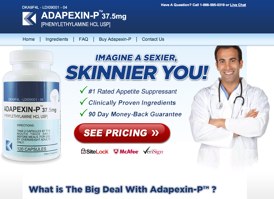 Negatives:  Nowhere near enough of each ingredient. Company responsible is dubious. 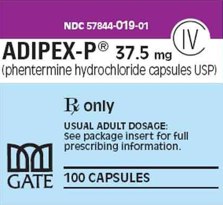 Imitation may be the sincerest form of flattery, as the old saying goes, but there is a fine line between imitation and deceit.

Considering that the current most popular FDA approved prescription weight loss drug is Adipex-P 37.5, the similarities in the products names are hard to ignore. A true quality product should not have to rely on gimmicks and trendy naming to sell itself.

Adapexin may not be a top-rated product, and it might almost identically match a prescription drug for weight loss, but that doesn’t mean it is effective. Take a look at the additional information found on Adapexin (including manufacturer and ingredient information) and judge for yourself.

Thankfully, they do list the individual ingredients of the product, since no real information is provided on how it works.

What are the ingredients

Adapexin-P claims the reason it works so well is its blend of eight “clinically proven ingredients in clinically proven amounts.” There’s no further information from any clinic or health professional that supports this proof. Let’s take a look at these eight ingredients individually and see just what this “powerful blend” is made of.

Phenylethylamine (37.5 mg) – The manufacturer’s claim that Phenylethylamine, or PEA, creates feelings of arousal, happiness, and reduces stress. They also claim it is an excellent appetite suppressant.  According to credible research reports, they are at least partially right. Phenylethylamine is a natural ingredient found in chocolate. It has often been called “the love drug” as research does show that it works on the chemical makeup of your brain to give you feelings of “being high” or “aroused”. However, since it is metabolized before it reaches the brain, it has no effect on suppressing your appetite. In fact, multiple studies done on its effectiveness all conclude that it has no effect in weight loss.

Raspberry Ketones (100mg) – Adipexin-P alludes that Raspberry Ketones increase metabolism. Through confusing wording, they basically say that some ingredients in raspberry can lead to fat reduction. The truth? Raspberry Ketones are a great seller right now in the market of natural supplements. While there are many current studies being done on its effectiveness, there is currently no conclusive scientific evidence available for Raspberry Ketones.

Chromax (500 mcg) – Since the Chromax ingredient has its own patented name, the trademark symbol beside it makes it look pretty credible. And it might be, but not necessarily for weight loss. Its ingredient, chromium is used to control blood sugar and insulin.  The makers of Adapexin-P claim that in one study, the average user reduced their daily caloric intake by over 300 calories a day with use of Chromax alone. Again, they give no information about who performed this study, and there is no documented evidence found that supports the claim.

Glucomannan (1000 mg) – The manufacturers say that a two month study on Glucomannan showed a “significant decrease in weight loss” in its subjects. In more detailed information, you can find the actual figure, which is 5.5 lbs of weight lost after two months.  Unless the person is an infant or toddler, a five or six pound weight loss is not significant; as weight fluctuations of up to 6 pounds are considered normal for adults. But, enough about what Adapexin-P claims Glucomannan does, More importantly, what does scientific evidence say about it? Many scientists and medical professionals conclude that there is a possible connection with Glucomannan lowering cholesterol and sugar levels for people with Type 2 Diabeties. However, at this point, there is not yet evidence that confirms this. There is, however, clear information on Glucomannan’s use in weight loss. All medical trials conclude that Glucomamman is 100% ineffective for weight loss.

Evodiamine (50 mg) – The claims Adapexin makes about evodiamine; that it reduces fat uptake and burns fat are true – if you are a mouse. Lab studies show that evodiamine did reduce the fat uptake in the mice they tested it on. However, nothing has been established to conclude that it works the same way in humans.

Ginger Root (50mg) – The company’s claims regarding the benefits of Ginger Root are a bit far-fetched. Products with ginger have been long used for nausea and sour stomach, just as Adapexin-P claims. However, the information added at the end suggesting that it also speeds metabolism is purely fictional.

Caffeine (199mg) – Good old caffeine – what would Monday mornings be without it? The claims that Adapexin-P makes here are true. Caffeine most definitely increases energy and metabolism. However, considering the price of the product, coffee or an energy drink are easier on the wallet and no different than the caffeine in this product.

Vitamin B-12 (500mcg) – Vitamin B-12 is widely used to promote energy and increase seratonin. There’s no questioning its effectiveness there. Many doctors and weight loss clinics offer a B-12 injection in conjunction with a diet and exercise program. Adapexin-P’s information on B-12 is the most accurate by far compared to some of its claims regarding the other ingredients. However, B-12 is easily accessible and inexpensive on its own. Paying a higher price for it doesn’t make it any more powerful.

There is no real media or press coverage about Adapexin itself. It seems that if the product worked the way they claim it does, then the media would eventually pick up on it. Anything mentioned in media or press regarding this product points to its manufacturers, Gadd Formulas LLC.

They appear to be one of the many pharmaceutical companies in Utah who do their best to keep anonymity. Press coverage that leads back to this drug are in the form of lawsuits against Gadd Formulas, or complaints regarding their “appearance only” customer service. The Adapexin website has both a live chat option and a toll-free number.

To test the validity of the claims, both options were attempted several times on November 2 and 3rd 2012. The “live chat” option consistently stated it was unavailable, and the customer service line is just an endless loop of hold prompts and music.

There are several amazing success stories found on Adapexin-P’s website, and other similar websites who all operate in Utah. Looking deeper into real customer reviews shows rather shocking evidence. Several users did report feeling great for the first few days they took Adapexin-P, but none of these stories end in any weight loss, even after a month of use.

The most disturbing thing regarding the reviews and complaints of the product involve open legal cases and testimonies of their credit card being falsely charged for products that were never ordered. These complaints, which can be found on reputable consumer websites, largely outnumber any reviews of the products effectiveness.

While Adapexin-P contains no known harmful ingredients, it doesn’t contain anything special either. Their “clinically proven combination” is a mixture of ineffective ingredients, ingredients effective for things other than weight loss, and two reputable ingredients – Caffeine and B-12.

At £30 / $50 for a one month’s supply, and endless cases of scams and credit card fraud, drinking a cup of coffee and popping an inexpensive over the counter B-12 supplement is probably just as effective for about.

Adapexin UK Stockists, Where To Buy

The products own website is the only option for UK customers. Not available in high street retailers or health supplement stockists.

Adapexin contains several ingredients with raspberry Ketone being the pick of the bunch.

Raspberry Ketone is best used as a standalone diet pill, undiluted by filler ingredients – We recommend Raspberry Ketone Plus, a high strength pure fruit product that is manufactured in the UK.

Raspberry Ketone has received almost universal acclaim since its introduction and its hard to make claim against.