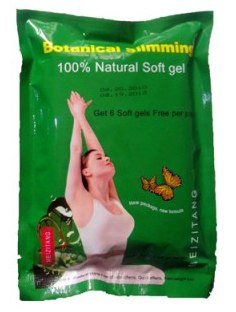 “Lose 10 Pounds in one week!” If you ever see this pop up on your computer screen, TV, or see it in a print ad, beware.

Any product that claims this has got to be suspicious. Meizitang Botanical Soft Gels are no exception to that rule.

Meizitang Botanical claim to be the 100% natural slimming supplement that can help you lose copious amounts of weight without a reason as to the how!

We review Meizitang with a high degree of suspicion. 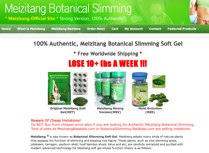 Claims:  To be able to help you lose 10lbs a week by using their natural diet supplement.

Positives: Not much in the way of positives

What Are They and How do They Work

Meizitang Botanical Soft Gels claim to work by using properties of natural plants to restrain the activity of lipase in stomach and intestinal canal, preventing the fat eaten from being digested into the body. This fat then passes out of the body with the stool.

There are 3 main products in the range:

A quick perusal of the internet to see if any other ingredients are present that are not mentioned on the main website indicate that large doses of caffeine may also be present, but let’s take a look at the medicinal properties of these herbs.

So, we are looking at some ingredients that may help you pass out some of the fat you consume, yes, by irritating your digestive system or coating it to prevent food absorption (and also nutrient absorption).

This makes for oily, runny stools, and is not burning any of the fat you now have on your body.

The ingredients also work by diuretic effect – making your kidneys go into overtime, but not taking off any of your existing body fat.

Meizitang Botanical Soft Gels’s parent company claims to not have received any reports of negative events related to this recall.

Of course, Meizitang Botanical Soft Gels have quite a few customer testimonials on their site claiming success. Independent reviews, however are mixed.

There are many positive reviews, but others complain of feeling “high” or “speedy”, having frequent and painful diarrhea, and a constant light oozing from the anus.

The combination of reviews coupled with the knowledge of what the herbs do suggests that weight loss is occurring, but it’s not a healthy or sustainable loss.

Many reviews also warn those who want to buy Meizitang Botanical Soft Gels to beware of the many imposter gels for sale on the Internet.

One of the most common side effects of Meizitang Botanical Soft Gels, and one that is acknowledged by the company, is a high frequency of dry mouth and extreme thirst. This is, of course, because the diuretics in the pills are dehydrating the body. It is very important to be constantly drinking water if you experience this side effect. Other side effects include sleeplessness, lack of appetite, feeling high or “speedy”, diarrhea and the aforementioned ooze.

In the final analysis, do Meizitang Botanical Soft Gels actually work? That answer depends on what you mean by “work”. Yes, you will lose weight – from dehydrating your body, and from ingesting herbs that will coat your stomach and provide the food with an impetus for a quick exit, which will cause you to not only loose calories, but valuable nutrients.

You may also suffer some significant discomfort to achieve what will end up being a reduction of muscle tissue and water, rather than a healthy, slower reduction of body fat.

Where To Buy Meizitang Botanical Soft Gels In The UK

It is not sold in-store (Boots the chemists, Holland and Barrett, Tesco or Superdrug) only appears to be available via its own website.

It is highly advised to ignore the above for many reasons. A big reason would be Raspberry Ketone.

If you are looking for a natural slimming supplement with a proven track record then Raspberry Ketone is ideal.

Champipned by TV’s Dr Oz – it is suggested that it could help you lose between 2 – 3 lbs per week.